Jim started out in 1956 as a cowboy singer along the lines of Gene Autry. After he learned to read & write a little, he began to write poems & learned to whistle alone in the back yards there between Dead Man’s Curve and the Muncie Drag Strip. There was an old shed by the fence and a field full of clod’s & soy beans, occasional squeal of pigs. A neighbor lady with long legs came by, invited his mother to church while he crashed his tricycle into the foundation of the house. Later, he and some friends would ride their bikes to the river, swing on vines, swim, play ball in the back yards, pick up cigarette butts from the neighbors driveway. The girls thought he looked like Paul McCartney.

His mother made up stories—often scary ones about lost children. She sang spiritual songs too that she made up while she worked around the house and pop songs like Mairsy Doats, Beetlebomb & Don’t Sit under the Apple Tree. His dad liked to wear flashy clothes & quote Hank Williams and Spike Jones. The wild music of the Pentecostal church was a strong influence. He remembers a country evangelist who sat down in a folding chair with his cheap guitar and wailed old gospel songs. It was terrifying and significant.

Blue Velvet, The Twist, I Want to Hold Your Hand segued into Junior High and High School—hormones and romance: the Beatles, Donovan, Simon and Garfunkle, Crosby Still and Nash, Blind Faith and on into the search for perspective on the nature of reality: Bob Dylan, the Grateful Dead and the relief of old blues men like Mississippi John Hurt. And, always there was an inspection of the Biblical parameters. So, over a  period of time, he became a tolerable if not quite adequate guitar player and turned his penchant for whistling into the harmonica, used the writing as a tool for expressions of love, humor & the working out of salvation. He’s written probably 200 songs though he’s lost & forgotten most of them.

Jim says, “It’s a dusty road full of wonder and danger and I’ve fallen into more than one ditch along the way. I found out a ditch is not a good place to sleep when the rain comes.”

Potluck Picnic in the Park #17 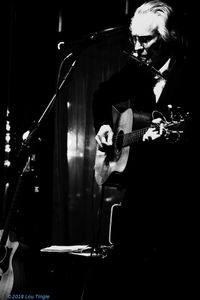 Live at the New Moon

Live at the New Moon